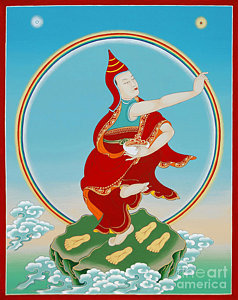 The Complete Sūtra of Golden Light Project is an undertaking by Erick Tsiknopoulos and the Sugatagarbha Translation Group to translate the longer and more complete versions of the Sūtra of Golden Light (Suvarṇaprabhā Sottama Sūtra), which have never before been translated into English or other Western languages, from Tibetan into English. The translation is being done at a very high level of quality, through consulting with Tibetan scholars, Sanskrit scholars, and thorough and painstaking editing and revision.

The translation is being done at a very high level of quality, through consulting with native Tibetan scholars, Sanskrit scholars, and ensuring thorough and painstaking editing and revision. We hope that the translation, in its final form, will meet the very highest standards of academic and scholastic excellence; and even surpass similar work being done on the translation of Buddhist sūtra-s elsewhere. We also intend for this translation to be a groundbreaking endeavor, on numerous levels. In particular, we wish to convey a new unique style of translation for sūtra-s: One which follows the source language (in this case, Tibetan) more closely than other translations; and which also produces a highly fluid readability, and a powerful sense of immediate relevance, to the English reader, partly in reliance upon modern ‘neo-classical’ literary styles.

There are three versions of the Sūtra of Golden Light (Suvarṇaprabhā Sottama Sūtra) in Tibetan: One consisting of 21 chapters, one of 29 chapters, and one of 31 chapters.

The version which is currently being translated by Erick Tsiknopoulos and the Sugatagarbha Translation Group, that of 29 chapters, is the one which is most known and most used among Tibetans both in Tibet and in exile; and also the one which is most commonly published as Tibetan books in Tibet, India and Nepal.

The 31 chapter version will also be translated by Erick Tsiknopoulos and the Sugatagarbha Translation Group, beginning in 2018.

Your support for this project is greatly appreciated. The chapters of the Sūtra of Golden Light (Suvarṇaprabhā Sottama Sūtra) which have been completed are available for viewing on this website. More, and eventually all of them, are forthcoming.

You can also make a donation to the project through this site. Your financial support is very helpful and valuable, as this translation project is unpaid work, which is not commissioned; nor do we have grants. All those who donate to the project will have their names included in the final publication. The finished translations will be published as books upon their completion.

Donate to the Complete Sūtra of Golden Light Translation Project

Please consider making a donation to The Complete Sūtra of Golden Light Translation Project: The 29 and 31 Chapter Versions of the Suvarṇaprabhā Sottama Sūtra through Paypal, by clicking on the ‘Donate’ button below. All major credit cards are accepted, and Paypal is completely secure.

For other donation methods, such as Western Union or direct bank transfer, please email us at

May all sentient beings benefit directly and indirectly from your kind and altruistic generosity, which helps to spread the powerful Dharma of the Sūtra of Golden Light around the world; enabling it to potentially reach millions of people, for thousands of years into the future.

Please remember to rejoice sincerely in your donation to this important translation project; and to dedicate the positive karmic force of your practice of generosity toward a virtuous cause.