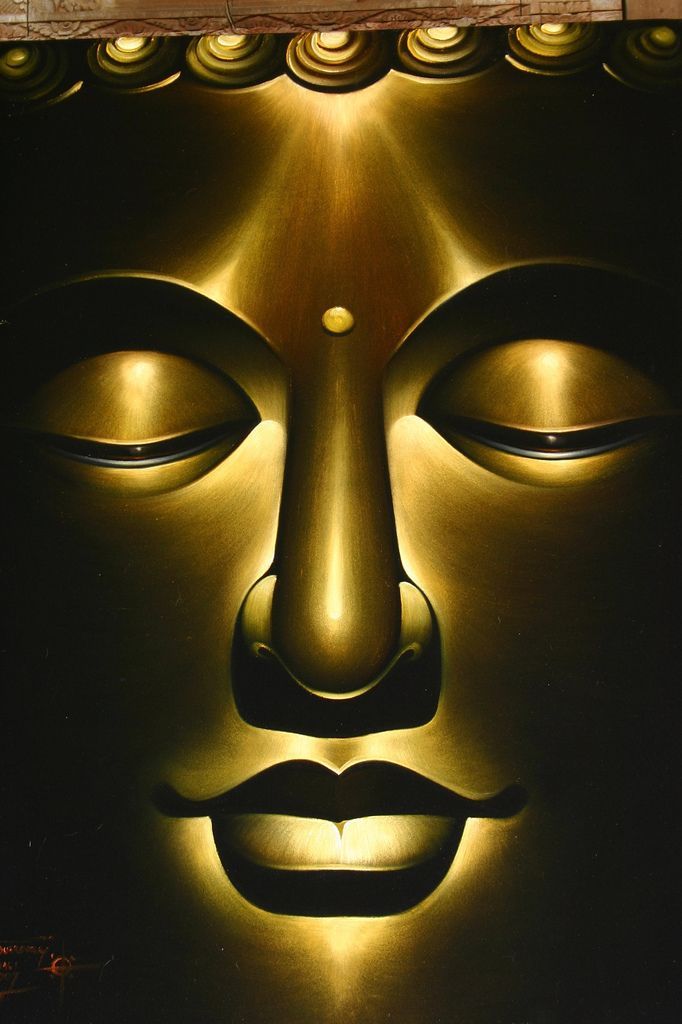 HOMAGE TO ALL BUDDHAS, BODHISATTVAS, PRATYEKABUDDHAS, AND ĀRYA ŚRĀVAKAS OF THE PAST, FUTURE, AND PRESENT.

Thus have I heard, at one time. The Bhagavān was in Rājagṛha, on the summit of Vulture’s Peak Mountain, abiding within the profound basic space of phenomena (dharmadhātu), entirely and utterly pure: The transcendent experiential domain of the Tathāgatas.

And there together in the same company was an immense Saṅgha of monks; and ninety-eight thousand (98,000) were they in number. All of them were also great Arhats; and like unto kings of elephants, were extremely subdued. They had exhausted their defilements, they were without afflictive mental states, their minds were most comprehensively liberated, their discerning insight had been most comprehensively unleashed, they had done what had to be done, they had laid down their burden, they had accordingly accomplished their own purpose, they had thoroughly cut the connections with conditioned existence, they had attained the supreme amongst transcendent masteries of might, they dwelt vigorously in completely pure ethical conduct, they were thoroughly established in skillful means and discerning insight, they had actualized the Eight Emancipations1; and they had come to the end of the far shore.

At a time during the late afternoon, they arose from their authentic meditative repose in their respective places of residence, approached to where the Bhagavān was, deeply bowed their heads at the feet of the Bhagavān; and circumambulating him three times, sat themselves down to one side.

Furthermore, there were Bodhisattva Mahāsattvas, one hundred thousand million (100,000,000,000 or 100 billion) in number; who were also staying together in the same company. And as all of them were endowed with great resplendence and majestic brilliance, like unto a Nāga King, they were everywhere acclaimed. They had engaged in generosity, attention to constant protection of completely pure ethical conduct, patience, and diligence for countless eons. They had actualized the mindfulness which goes beyond all contemplative stabilizations (dhyānas). They had completely opened the doors of discerning insight. They had totally accomplished expertise in skillful means. With their transcendent powers, they manifested in diverse forms; and they had discovered transcendent clairvoyant perception. They had obtained the great total recall (dharani). Their confidence was inexhaustible. As they had eliminated all afflictive mental states and all-consuming disturbing emotions, they had attained the deep wisdom which knows all immediate manifestations; and they had conquered the armies of Māras and hostile forces. By beating the great drum of the Dharma, they tamed all non-Buddhists; and caused them to give rise to utterly lucid minds. By turning the Wheel of the Transcendent Dharma, they liberated gods and humans. They adorned all Buddha Fields in the ten directions; and conferred transcendent benefit upon the denizens of the six realms. They had a prosperous abundance of vast deep wisdom. They were endowed with great patience. They were suffused with loving-kindness. They dwelt in the mind of great compassion. They had stability in great powers. They had rendered service to all Buddhas. They had not passed into Complete Nirvāṇa; and since the limits of the future are infinite, they had sworn great oaths to remain [in Saṃsāra ]. They had generated completely pure causes under many Buddhas. They had gained tolerance toward the non-arising of phenomena throughout the three times. They had gone totally beyond the experiential domain of the Śrāvakas and Pratyekabuddhas. As they had great skillful means, they guided the universe; as they were great teachers, they were expert in explaining the innermost intent of the profound Dharma which is to be taught. As they had actualized Voidness, they had thoroughly cut through doubts.

At the time of late afternoon, they arose from their authentic meditative repose in their respective dwelling places, went to the where the Bhagavān was, bowed their heads at the two feet of the Bhagavān; and circumambulating him three times, sat themselves down to one side.

At the time of late afternoon, they came out from their respective homes, approached where the Bhagavān was, bowed their heads at the feet of the Bhagavān; and circumambulating him three times, sat down to one side.

At the time of late afternoon, all of them too approached where the Bhagavān was, bowed their heads at the feet of the Bhagavān; and circumambulating him three times, sat down to one side.

At the time of late afternoon, all of them too, coming out from their respective abodes, approached where the Bhagavān was, bowed their heads at the feet of the Bhagavān; and circumambulating him three times, sat down to one side.

Furthermore, there were kings of Yakṣas, such as Vaiśravaṇaputra and so on, thirty-six thousand (36,000) in number. They were, namely, the Yakṣa Mango, the Yakṣa Mango Bearer, the Yakṣa Essence of Lotus Light, the Yakṣa Lotus Face, the Yakṣa Wrathful Expression, the Yakṣa Displayer of Great Destruction, the Yakṣa Shaker, the Yakṣa Ravisher of Gifts and Food and so on. All of those Yakṣas also had faith in the perfect Dharma of the Tathāgata; and had nothing but diligence in protecting it.

At the time of late afternoon, all of them too approached where the Bhagavān was, bowed their heads at the feet of the Bhagavān; and circumambulating him three times, sat themselves down to one side.

Furthermore, there were kings of Garudas, such as King Magical Force of the Perfumed Elephant, and so on; forty-nine thousand (49,000) in number.

Moreover, there were Gandharvas, Asuras, Kinnaras, Mahoragas and so on. There were heavenly sages of the mountains, forests, rivers and oceans; great kings with their retinues, princesses and princes; sons of good family, daughters of good family; gods, humans and so on; and all of them read and recited the unexcelled Great Vehicle (Mahāyāna), upheld and retained it, asked questions about it, propagated it, and made comprehensive aspirational prayers aimed at guarding and protecting it.

At the time of late afternoon, all of them too approached where the Bhagavān was, bowed their heads at the feet of the Bhagavān; and circumambulating him three times, sat down to one side.

It was in this way that the Śrāvakas, Bodhisattvas, Devas, Men, Asuras, Garudas and so on, these eight sets of individuals, gathered like clouds. They focused their minds one-pointedly, joined their palms together; and with eyes unwavering, they gazed upon the visage of the Bhagavān. Wishing to be taught the Transcendent Dharma, they prayed.

Then the Bhagavān, at the time of late afternoon, arose from his state of meditative absorption (samādhi); and beholding the numerous assembled retinues, thereupon spoke in the following verses:

“The Sovereign King of Sūtra Teachings:
If you listen to it, it is extremely profound;
And if you thoroughly investigate it, it is profundity itself.
The Transcendent Golden Light shall I expound.

In order to extinguish all misdeeds,
This, a transcendent, auspicious exposition,
Serves to exhaust allKarma of misdeeds,
Serves to bestow all happiness,
Serves to eradicate all suffering,
Is the foundation of the state of omniscience,
And is well adorned by all resplendence;
Conferring its blessings, this shall I proclaim.

Sentient beings whose senses are defective,
Whose lifespans are exhausted and whose longevity is deteriorating,
Who have become lacking in prosperity (phun sum tshogs min gang chags),
Whom the gods have turned their backs upon,
Who are hated by people who are their loved ones,
Who are endangered byplanetary influences (bran gza’) and the like,
Who are in mutual discord,
Who are afflicted by decline in wealth,
Who are stricken by misery and grief,
Who are in danger or poverty,
Who have inauspicious planetary and constellational influences and curses,
Who are threatened by intolerable evil spirits,
And even those who see evil dreams,
Arising from sorrow and fatigue:
They should wash vigorously, rendering themselves clean;
And endeavor to listen to this Transcendent Sūtra Teaching.

Should those with virtuous intent and clear mind,
Adorn themselves well in clean garments,
And endeavor to listen to this Sūtra,
The profound experiential domain of the Buddhas,
Then, through the majestic brilliance of this Sūtra Teaching,
The afflictions of all living creatures,
The likes of which are most unbearable,
Shall be forever pacified.

They will be protected,
By none other than the Protectors of the Universe themselves,
Together with their ministers and masters of assembly,

By numerous millions of Yakṣas,
By the Great Goddess Sarasvatī,
By the Goddess Who Dwells in theNairañjanā (River3),

By Brahmā Kings and Deva kings,
By the incredibly powerful kings of Nāgas,

By kings of Kinnaras and kings of Asuras;

And likewise by kings of Garudas.

They, with their clans and might, will arrive,
Together with their mounts;
And without distraction, day and night,
Will offer protection to those beings.

I shall fully expound this Sūtra on the profound,
The Buddhas’ domain of experience,
The secret of all Buddhas;
Difficult to encounter in billions of eons.

Those who listen to this Sūtra,
Those who cause others to hear it,
Those who rejoice in it,
And those who make offerings to it,
Will have offerings made to them, for billions of eons,
By Devas and Nāgas,
Men and Kinnaras;
Asuras and Yakṣas.

They will be intensely cared for,
By the Buddhas of the ten directions,
And also by the Bodhisattvas,
Engaged in the profound.

Put forth every effort to render your mind stainless,
And to make it expansive, as well;
And making the mind extremely clear,
Listen to this Transcendent Sūtra.

Those who listen to this Sūtra,
Will be eminent among humans,
Will correctly attain a human existence;
And will live a life of good fortune.

For those whose ears
This Transcendent Discourse resounds,
Their roots of virtue will be refined;
And they will be praised by numerous Buddhas.”

FROM THE SOVEREIGN KING OF SŪTRA TEACHINGS, THE TRANSCENDENT GOLDEN LIGHT, THIS WAS THE FIRST CHAPTER: ‘THE PREAMBLE’.

Ganges, passing near Bodhgaya in the state of Bihar, India. After leaving the royal palace, Shakyamuni

practised austerities for six years on the shore of this river in the forest near the village Uruvela.

Eventually he became aware that this way of practising would never lead to enlightenment. He bathed

in the Nairañjana River, and then, accepting milk curds offered by a girl named Sujata, recovered his

strength. He went then to sit under a nearby pippala tree until reaching enlightenment. Thus the tree

Donate to the Complete Sūtra of Golden Light Translation Project

Please consider making a donation to The Complete Sūtra of Golden Light Translation Project: The 29 and 31 Chapter Versions of the Suvarṇaprabhā Sottama Sūtra through Paypal, by clicking on the ‘Donate’ button below. All major credit cards are accepted, and Paypal is completely secure.

For other donation methods, such as Western Union or direct bank transfer, please email us at

May all sentient beings benefit directly and indirectly from your kind and altruistic generosity, which helps to spread the powerful Dharma of the Sūtra of Golden Light around the world; enabling it to potentially reach millions of people, for thousands of years into the future.

Please remember to rejoice sincerely in your donation to this important translation project; and to dedicate the positive karmic force of your practice of generosity toward a virtuous cause.